This past May marked 120 years since the opening day of the World’s Columbian Exposition, also known as the Chicago World’s Fair. The fair, held in commemoration of 400 years since Columbus’ arrival to the New World, opened in 1893 and comprised over 600 acres. Over 27 million people visited the fair between opening day on May 1st and closing day on October 31st. The Exposition was a city within the city of Chicago, consisting of 200 new and elaborate buildings constructed specifically for the occasion. Because of the white stucco used on the exterior of the buildings, and the electricity that brilliantly lit the buildings at night, the main area of the fair was referred to as The White City.

The World’s Columbian Exposition was at once entertainment and culture, a display of intellectual and artistic endeavors and traditions, and a way to make money. Forty-three states and territories and over 45 countries were represented at the fair, each with their own attractions and demonstrations. Visitors were exposed to new forms of dancing, music, material goods, and food. Things we still enjoy today were introduced or gained popularity at the fair, including Cracker Jack, Juicy Fruit Gum, carbonated soda, the dishwasher, and the Ferris Wheel.

The Hershey Story’s collection contains many artifacts related to World’s Fairs, which were saved by George Danner, a merchant from Manheim, PA, (Though Milton Hershey did attend the Chicago World’s Fair, his visit was for chocolate-related business!)  In 1935, Mr. Hershey acquired Danner’s collection and placed it in his museum in Hershey. Though approximately one quarter of the U.S. population went to the Chicago fair, it was not an easy undertaking. The expenses for travel, lodging, and food added up quickly. Danner had the means to attend, and the extra money to purchase quite a few souvenirs. There were countless souvenir stands throughout the fair that sold everything from books and maps to cups and salt shakers. Visitors were eager to take a piece of the fair home with them. 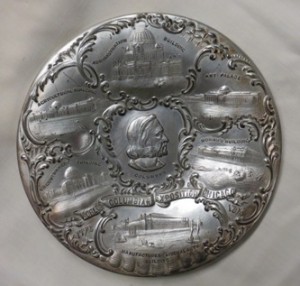 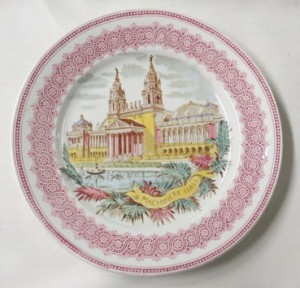 Commemorative plates, cups, and spoons were very popular souvenirs at the fair. This silver plate features an image of Columbus in the middle, surrounded by the main fair buildings. This colorful china plate has a hand-painted image of Machinery Hall. 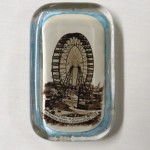 This paperweight, made by Pyrophoto Co. of New York, features a photograph of the Ferris Wheel. The first Ferris Wheel was made by George Ferris, Jr. specifically for the fair, as a response to the Eiffel Tower of the 1889 Paris Exposition. It opened to the public in June 1893, and had 36 cars, each accommodating 60 people. The Ferris Wheel became the icon of the Chicago World’s Fair. 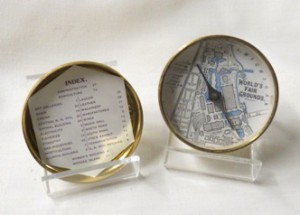 Another item for sale was this compass, called The Columbus Needle. It was marketed as “The simplest and most complete guide to the World’s Fair”. The paper label on the face of the compass contains a map of the fairgrounds. Each building is numbered, and there is a corresponding index. 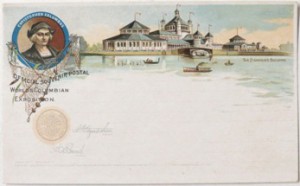 The souvenir postcard was introduced at the World’s Columbian Exposition. Visitors could share the wonder of the fair with their friends and relatives that could not make the trip.