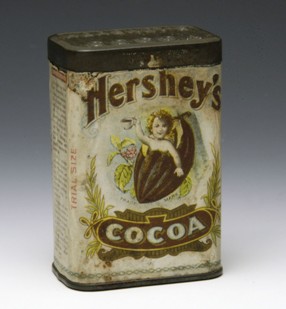 Most Americans can identify a Hershey’s chocolate bar with its familiar maroon and silver wrapper. But Hershey products were not always so recognizable. When Milton Hershey began producing sweet chocolate confections at his Lancaster Caramel Company factory in 1894, the Hershey brand as we know it today did not exist. Mr. Hershey produced a wide variety of fancy shapes in just as many fancy packages. Elaborately molded chocolate fans and chocolate chrysanthemums sold in attractive and unique boxes were the order of the day.

Milton Hershey was a pioneer when it came to brand building. Beginning with the trademarked design of the “Child in the Cocoa Bean Pod” logo in August 1898, Hershey’s various product packaging shared a common element. Consumers began to associate an affordable and high-quality product with the easily recognized symbol of the Hershey Chocolate Company.

The child in the cocoa bean pod had subtle variations throughout its use. The child sometimes had brown or blonde hair and differing facial expressions. Depending on the product, the child held a steaming cup of hot cocoa or a solid chocolate bar.  Perhaps one of the biggest questions is regarding the child’s gender – is it a boy or a girl? No one really knows for sure. The child has appeared not only on chocolate products but also on Hershey Chocolate Company letterhead, salesman’s price lists, trolley tickets, and even the original door handles for the 19 East Chocolate Avenue office building.

For Milton Hershey’s eightieth birthday on September 13, 1937, employees presented him with a gold, platinum, and diamond ring depicting the child in the cocoa bean pod during a celebration at the Sports Arena. Sales clerk, J.L. Stahl met with Mr. Hershey two days after the celebration. According to an interview with Stahl, Mr. Hershey said, 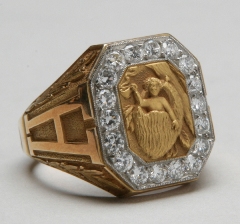 “Stahly, nothing in the world has ever impressed me like that party the other night. I want people to understand why I don’t wear that ring.” He told me then when he first realized he was a wealthy man that he went out with a rather large diamond ring and a stick pin, and looked at himself in the mirror. “I came from a plain family,” he said, “and I said to myself, ‘M.S. Hershey, you’re a God-damned old fool,’ and I have never worn jewelry since.”

The museum purchased the ring from Mr. Hershey’s estate in 1945 for the bargain price of $150! Part of the permanent collection, the ring is displayed in the “Hershey Builds Hershey” exhibit on the second floor of the museum.

The child in the cocoa bean pod logo was used until 1968 when the chocolate company reorganized as Hershey Foods Corporation. At that time a stylized letter “H” became the new trademark symbol.